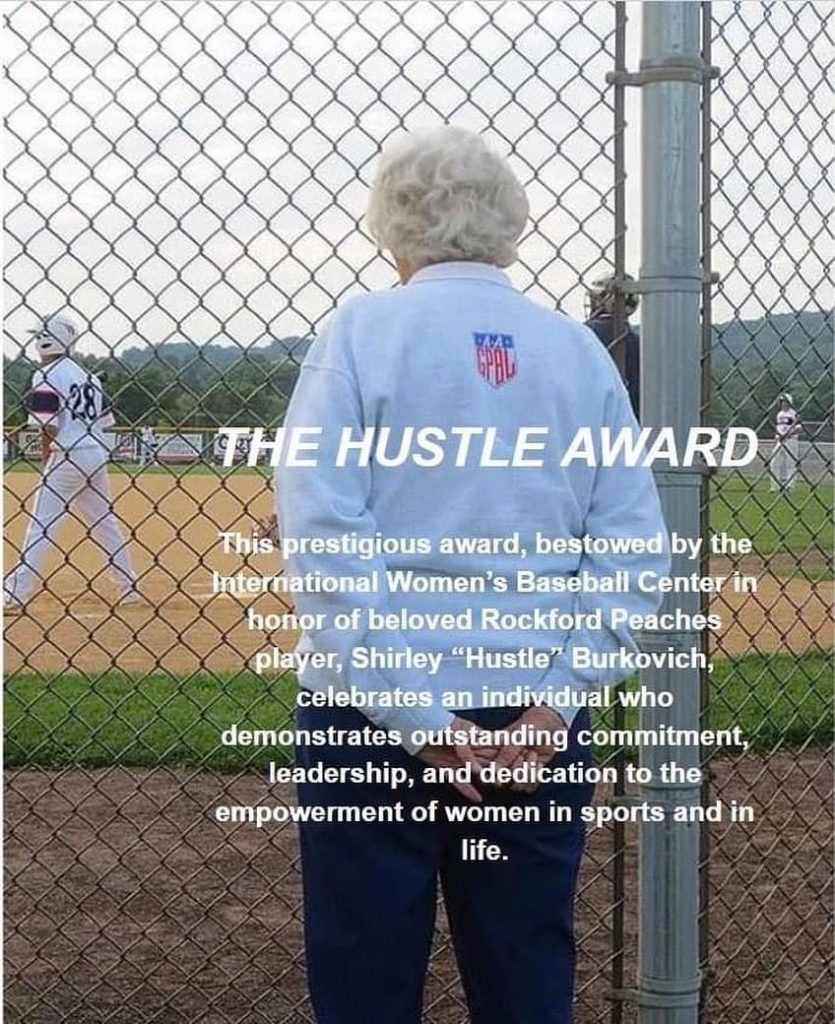 The announcement of the Hustle Award was made on Friday, September 16, 2022, in concurrence with the 4th Annual IWBC (International Women’s Baseball Center) -SABR (Society for American Baseball Research) Women in Baseball Conference, during the Kick-Off Celebration. This event is being hosted virtually by Rockford University.

This prestigious award, bestowed by the International Women’s Baseball Center in honor of beloved Rockford Peaches player, Shirley “Hustle” Burkovich, celebrates an individual* who demonstrates outstanding commitment, leadership, and dedication to the empowerment of women in all aspects of baseball and life.

Like many girls of her generation, Shirley began playing baseball with her brother and the neighborhood boys. In 1948, her brother convinced her to try out for the AAGPBL and, at just 16 years old, Shirley joined the AAGPBL and played from 1948-1951. After retirement Shirley never stopped serving as an advocate for women and girls in baseball, working with the AAGPBL Players’ Association and being an IWBC founder. Whether she was advocating for girls and women in baseball, acting as a mentor, mediator, or defending and supporting her friends, Shirley was simply good. She was honest, kind, and always true to her principles. There was no greater friend.

The International Women’s Baseball Center (IWBC) was created on a February afternoon in 2013 when a small group of friends got together in Sunset Beach, California.  Over pizza and beer, we discussed what seemed to us a glaring absence in the world of sports: a home for women’s baseball. Out of that meeting came the IWBC, and a determination to challenge the myth that girls and women don’t play baseball. With a mission to protect, preserve, and promote all aspects of women’s baseball, both on and off the field; Rockford became the logical place to put our mission into action. In 2014 we were given property near historical Beyer Field and from that day until this the IWBC has worked to build that dream.

Winners of the Hustle Award.

A permanent plaque listing the winners will be on display at the IWBC Museum. Each recipient will also receive a commemorative award.

The first award will be presented on IWBC Founders’ Day: February 22, 2023.

To nominate a person for the Hustle Award, the following information will be needed:

Some of this information will be specifically asked in the nomination form.

Announcing of open nominations will be made during the Women in Baseball Conference in September, at which point the nomination form will go live.

Closing of nominations will be December 31.

All nominations can be submitted here.

*The Hustle Award is intended for anyone, regardless of gender identity and location and can be a posthumous award. Due to the character clauses of the award, all nominators must sign affirmations to the credit of the nominee’s character to the best of their knowledge. Any active IWBC Board Members are ineligible for the award. Only one nomination per person, please.